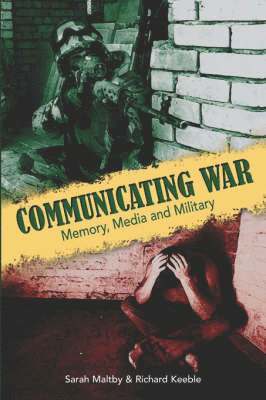 Wars are now mediated in unprecedented ways and through a variety of communicative forms. Correspondingly, there is an increasing awareness among those involved in war of the need to gauge and manage what is communicated. Communicating War: Media, Memory and Military contextualises these developments by locating the emergence of recent wars and terrorist activity in a wider frame of global socio-political change, highlighting the social, political and historical aspects of 'communicating war'. This includes: . the remembering and forgetting of wars through cultures of collective memory and media selectivity; . the organization, practice and culture of media institutions in the mediation of war information; . and the strategic use of information by military institutions and terrorist organizations in the execution of war and terrorist acts. Remaining sensitive to the complexities of conflict, the book moves beyond a focus on UK and US interventions and reflects upon the communication of war in relation to all forms of conflict, particularly terrorism and under reported civil conflicts.Adopting a multi-disciplinary approach, Communicating War: Memory, Media, Military will be of interest to students in journalism, media, war and peace studies, international relations and international politics. Contributors include practitioners from within the journalistic and military communities and international scholars from a broad range of social sciences: Stuart Allan, David Altheide, Chris Atton, Oliver Boyd-Barrett , Nico Carpentier, Neal Curtis, Richard Keeble, Andrew Hoskins, Makram Khoury-Machool, Sarah Maltby, Donald Matheson, Lara Pawson, Ron Schleifer, Martin Shaw, Angus Taverner, John Tulloch, Howard Tumber and Jeremy Tunstall. - REVIEWERS COMMENTS - "Few topics of media research affect us more personally, and emotionally, than how media represents war, and the military's partly hidden role in that process. Communicating War is a wide-ranging and important contribution to that debate, which also has the advantage of being right up-todate. Essential reading!"Nick Couldry, Professor of Media and Communications, Goldsmiths University of London "We live in an age where the relationship between war and communications media is more complex and more urgent than ever before. Communicating War is, therefore, to be welcomed. Its rich collection sets the agenda, as does the War and Media Network, from which it emerges. Crucially, the collection reminds us of that which is 'forgotten', which can be as important in the war-media relationship today as those things embedded in memory." James Gow, Professor of International Peace and Security, Kings College London "A timely and hugely valuable contribution to the scholarly literature on news about conflict and war. The range of contributors, and the variety of themes covered, make this collection essential reading for students and researchers of conflict reporting in the post-9/11 world." Brian McNair, Professor of Journalism and Communication, University of Strathclyde. "Communicating War is a timely collection of great diversity, bringing both historical depth and theoretical sophistication to a range of urgent contemporary debates about the media's role in war."Philip Hammond, Reader in Media and Communications, London South Bank University
Läsglädje för alla, varje dag