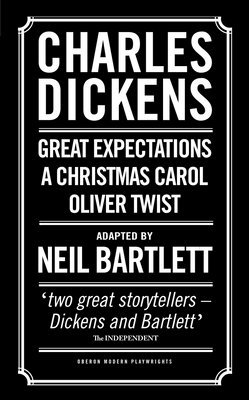 Using only Charles Dickens' extraordinary words and a chameleon ensemble of actors, Neil Bartlett's powerful stage versions of Dickens have gathered wide critical acclaim. This collection includes: Great Expectations: From its opening image of little Pip, alone on the windswept marshes, to the haunted darkness of mad Miss Haversham's cobweb-strewn lair, this adaptation takes its audience on a journey right to the heart of Dickens' great exploration of childhood terrors and hopes - and of adult dreams and regrets. This version was recently directed by Bartlett himself to great acclaim at the Bristol Old Vic. A Christmas Carol: Dickens's story of solitary miser Ebenezer Scrooge, who is taught the true meaning of Christmas by a series of ghostly visitors, has proved one of his most well-loved works, and has profoundly influenced our attitude towards the season. Oliver Twist: Bartlett's powerful version of Oliver Twist brings the dark underbelly of nineteenth-century London back to bold theatrical life. The unforgettable characters inhabit a world filled with images of danger and fear, innocence and hope; a world seen through the eyes of an astonished child. Between them, these adaptations have had over a hundred productions. They have been widely performed by schools, universities and community theatre groups throughout the English-speaking world and theatres that have produced them include London's Lyric Hammersmith, the Bristol Old Vic, the Southwark Playhouse, the Glasgow Citizens, the American Repertory Theatre in Boston and the La Jolla Playhouse (USA).
Läsglädje för alla, varje dag