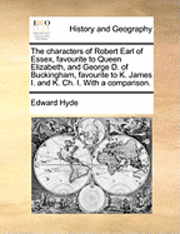 The Characters of Robert Earl of Essex, Favourite to Queen Elizabeth, and George D. of Buckingham, Favourite to K. James I. and K. Ch. I. with a Comparison.

<Notes>First published in 'Reliqui Wottonian' in 1651 as 'Difference and disparity between the estates and conditions of George, Duke of Buckingham, and Robert, Earl of Essex' and attributed to Sir Henry Wotton in that work.