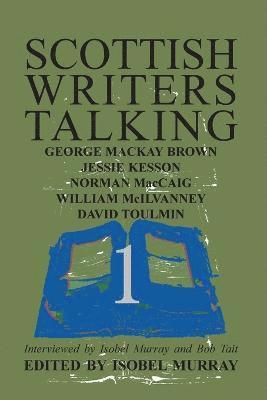 This is the first volume in a series begun by Isobel Murray and Bob Tait in 1984, and finished in 2008 Authors covered in other volumes include: 2. Iain Banks, Bernard MacLaverty, Naomi Mitchison, Iain Crichton Smith,Alan Spence. 3. Janice Galloway, John Herdman, Robin Jenkins, Joan Lingard, Ali Smith. 4. Jackie Kay, Ian Rankin, Alan Massie, James Robertson, William (Bill) Watson. Extracts from Reviews for Volume 3 Murray is a fine interviewer as well as an incisive critic, academic and biographer. These aren't the kind of interviews that merely gift-wrap the books under discussion; here she's putting whole careers up for lively discussion, and unless she has read every word she wouldn't dream of pressing the tape recorder's "on" button. This is one book it would be impossible to read without wanting to re-read at least half a dozen more straight away. David Robinson, The Scotsman One woman has for several years been circumventing the tired old restrictions and distortions of the formula. Isobel Murray, Honorary Professor in Modern Scottish Literature at Aberdeen University, has been getting writers to talk, at length, on tape ...It is an utterly gripping collection. Because the writers are allowed to express themselves without being manipulated or paraphrased, their conversation evolves into real revelation. Murray's consummate skill as an interviewer. She never intrudes, or interrupts, or postures. Her deep knowledge and understanding of literature and writing act as a sort of psychological water diviner, drawing out descriptions and confidences that a less clever interrogator would never bring to the surface. The obvious luminaries of this series may be the writers, but the pole star is Murray. Most other interviewers are mere astral dust by comparison. Rosemary Goring, The Herald Simply indispensable. Hugh MacDonald, The Herald
Läsglädje för alla, varje dag