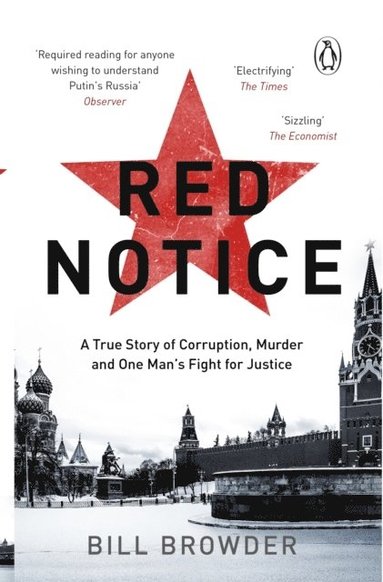 November 2009. An emaciated young lawyer, Sergei Magnitsky, is led to a freezing isolation cell in a Moscow prison, handcuffed to a bed rail, and beaten to death by eight police officers. His crime? To testify against the Russian Interior Ministry officials who were involved in a conspiracy to steal $230 million of taxes paid to the state by one of the world's most successful hedge funds. Magnitsky's brutal killing has remained uninvestigated and unpunished to this day. His farcical posthumous show-trial brought Putin's regime to a new low in the eyes of the international community. Red Notice is a searing expose of the wholesale whitewash by Russian authorities of Magnitsky's imprisonment and murder, slicing deep into the shadowy heart of the Kremlin to uncover its sordid truths. Bill Browder - the hedge fund manager who employed Magnitsky - takes us on his explosive journey from the heady world of finance in New York and London in the 1990s, through his battles with ruthless oligarchs in the turbulent landscape of post-Soviet Union Moscow, to his expulsion from Russia on Putin's orders. Browder's graphic portrait of the Russian government as a criminal enterprise wielding all the power of a sovereign state illuminates his personal transformation from financier to human rights activist, campaigning for justice for his late lawyer and friend. With fraud, bribery, corruption and torture exposed at every turn, Red Notice is a shocking but true political roller-coaster that plays out in the highest echelons of Western power.
Läsglädje för alla, varje dag