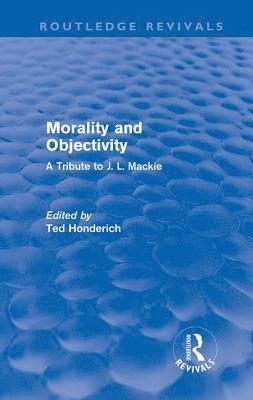 The late J. L. Mackie and his work were a focus for much of the best philosophical thinking in the Oxford tradition. His moral thought centres on that most fundamental issue in moral philosophy - the issue of whether our moral judgements are in some way objective. The contributors to this volume, first published in 1985, are among the most distinguished figures in moral philosophy, and their essays in tribute to John Mackie present views at the forefront of the subject. Five of the essays give a new understanding of the objectivity of moral judgements. These are by Simon Blackburn, R.M. Hare, John McDowell, Susan Hurley and Bernard Williams. The remaining contributors - Philippa Foot, Steven Lukes, Amartya Sen, David Wiggins - give their attention to problems which are equally compelling, such as the defence of a moral outlook based on a conception of a need and of what follows from it. The volume also includes the addresses given by Simon Blackburn and George Cawkwell at the memorial service for John Mackie, and a list of his publications, compiled by Joan Mackie.
Läsglädje för alla, varje dag