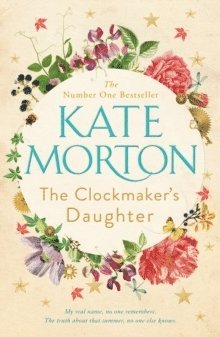 From the bestselling author of The House at Riverton and The Secret Keeper, Kate Morton brings us her dazzling sixth novel, The Clockmaker's Daughter. My father called me Birdie; he said I was his little bird. Others knew me as his child, the clockmaker's daughter. Edward called me his muse, his destiny. I am remembered as a thief, an imposter, a girl who rose above her station, who was not chaste. My real name, no one remembers. The truth about that summer, no one else knows. Summer, 1862. A group of young artists led by the passionate and talented Edward Radcliffe descends upon Birchwood Manor in rural Oxfordshire. Their plan: to spend a secluded summer month in a haze of inspiration and creativity. But by the time their stay is over, one woman has been shot dead while another has disappeared; a priceless heirloom - the Radcliffe Blue Diamond - is missing; and Edward Radcliffe's life is in ruins. Over one-hundred-and-fifty years later, Elodie Winslow, a young archivist in London, uncovers a leather satchel containing two seemingly unrelated items: a sepia photograph of an arresting-looking woman in Victorian clothing, and an artist's sketchbook containing the drawing of a twin-gabled house on the bend of a river. Why does Birchwood Manor feel so familiar to Elodie? And who is the beautiful woman in the photograph? Will she ever give up her secrets? The Clockmaker's Daughter is a story of murder, mystery and thievery. It is a book haunted by beautiful ghosts and long-kept secrets, for every visitor to Birchwood perceives a trace of what was lost in the house, together with the consolations of enduring love. And, flowing through its pages like a river, is the voice of a woman who stands outside of time, whose name has been forgotten by history, but who has watched it all unfold. Birdie Bell, the clockmaker's daughter.
Läsglädje för alla, varje dag