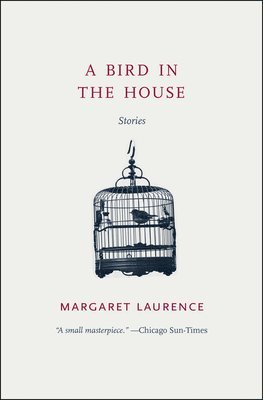 A Bird in the House

"A Bird in the House" is a series of eight interconnected short stories narrated by Vanessa MacLeod as she matures from a child at age ten into a young woman at age twenty. Wise for her years, Vanessa reveals much about the adult world in which she lives.
"Vanessa rebels against the dominance of age; she watches her grandfather] imitate her aunt Edna; and her rage at times is such that she would gladly kick him. It takes great skill to keep this story within the expanding horizon of this young girl and yet make it so revealing of the adult world."--"Atlantic"
""A Bird in the House" achieves the breadth of scope which we usually associate with the novel (and thereby is as psychologically valid as a good novel), and at the same time uses the techniques of the short story form to reveal the different aspects of the young Vanessa." --Kent Thompson, "The Fiddlehead"
"I am haunted by the women in Laurence's novels as if they really were alive--and not as women I've known, but as women I've been."--Joan Larkin, "Ms. Magazine"
"Not since . . . "To Kill a Mockingbird" has there been a novel like this. It should not be missed by anyone who has a child or was a child."--Pittsburgh "Post-Gazette"
One of Canada's most accomplished writers, Margaret Laurence (1926-87) was the recipient of many awards including Canada's prestigious Governor General's Literary Award on two separate occasions, once for "The Diviners."
Läsglädje för alla, varje dag