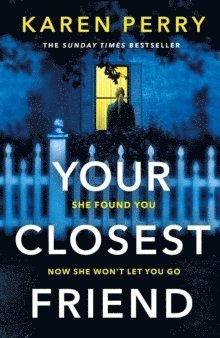 Your Closest Friend: She found you. Now she won't let you go.

One hot, humid night in London, Cara is caught up in a wave of terror and chaos. Until a hand reaches out - and a stranger pulls her to safety.

Taking refuge with her unlikely rescuer, Cara shares more of herself with Amy than she ever has with anyone, including her husband. But after the hours of darkness are over, she can't remember exactly what secrets she revealed. Cara attempts to put it all behind her. But cracks begin to show in her life and marriage, and she starts to receive anonymous threats.

As Cara's life begins to skid out of control, Amy reappears, offering to help. Amy is only person Cara can turn to, who knows her hidden side. Amy saved her that night. But what if the biggest threat to Cara is the stranger she's invited into her home?