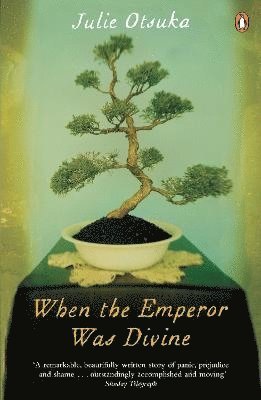 When the Emperor Was Divine

Longlisted for the Orange Prize for Fiction, When the Emperor Was Divine is the critically acclaimed debut novel by bestselling writer Julie Otsuka - author of The Buddha in the Attic - in which she explores the lives of Japanese immigrants living in America during the Second World War. It is four months after Pearl Harbour and overnight signs appear all over the United States instructing Japanese Americans to report to internment camps for the duration of the war. For one family it proves to be a nightmare of oppression and alienation. Explored from varying points of view - the mother receiving the order to evacuate; the daughter on the long train journey; the son in the desert encampment; the family's return home; and the bitter release of their father after four years in captivity - it tells of an incarceration that will alter their lives for ever. Based on a true story, Julie Otsuka's powerful, deeply humane novel tells of an unjustly forgotten episode in America's wartime history. 'Honest and gloriously written, will haunt you long after you've turned the final page. Brilliant' Elle 'An intense jewel of a book written with clarity and beauty' Marie Claire 'Vindicates the suffering of the Japanese in America ...a blistering first novel' The Times Literary Supplement 'A compelling, powerful portrait of a terrible endurance. Terrific' The Times Julie Otsuka was born and raised in California. She is the author of the novel When the Emperor Was Divine, and a recipient of the Asian American Literary Award, the American Library Association Alex Award, and a Guggenheim fellowship. Her second novel, The Buddha in the Attic, was nominated for the 2011 National Book Award. She lives in New York City.
Läsglädje för alla, varje dag