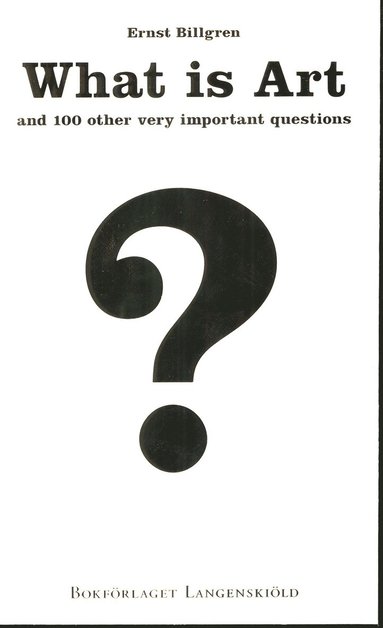 What is Art and 100 other very important questions

It is about time. Ernst Billgren is about time. He simply never stays where you put him. Now it is time for him to go English, or international. Ernst was world famous in Sweden already ages ago for being a sculptor and a painter. His mosaics and figurative paintings introduced something that was already forgotten in contemporary art. He was not difficult. He was even popular. Everybody, not just the high-end critics, loved what he presented and he was very outspoken about he he wanted people to understand arts real potential. It was evident that this was somebody who really new his métier. But even more so that Ernst Billgren got there because he was on a mission to find out what art really could be in our times. He never left the painting but suddenly he was everywhere. Ernst Billgren went in to the movies, the theater and television. He became a public persona, a Swedish Warhol or maybe Koons, but really Swedish, North European And he started to write. More books a year than most writers. He is clearly on a mission. Ernst Billgren is moving. From art to society and back again. He has said that he never had an opinion. So I guess he had to write a book about it. Foreword by Jan Åman
Läsglädje för alla, varje dag