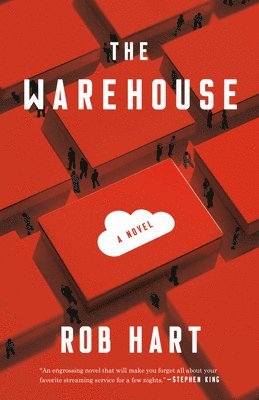 Cloud isn't just a place to work. It's a place to live. And when you're here, you'll never want to leave.

"A thrilling story of corporate espionage at the highest level . . . and a powerful cautionary tale about technology, runaway capitalism, and the nightmare world we are making for ourselves."-Blake Crouch, New York Times bestselling author of Dark Matter

Film rights sold to Imagine Entertainment for director Ron Howard! • NAMED ONE OF THE BEST BOOKS OF THE YEAR BY Financial Times • Real Simple • Kirkus Reviews

But compared to what's left outside, Cloud's bland chainstore life of gleaming entertainment halls, open-plan offices, and vast warehouses…well, it doesn't seem so bad. It's more than anyone else is offering.

Together, they'll learn just how far the company will go…to make the world a better place.

Set in the confines of a corporate panopticon that's at once brilliantly imagined and terrifyingly real, The Warehouse is a near-future thriller about what happens when Big Brother meets Big Business--and who will pay the ultimate price.

Praise for The Warehouse

"A fun, fast-paced read [that] walks a fine line between a near-future thriller and a smart satire . . . makes you wonder if we're already too far into a disastrous future, or if there's still some hope for humanity."-NPR

"I loved The Warehouse, although and because it made my blood run cold. This is what our world could be by this time next year."-S.J. Rozan, Edgar award-winning author of Paper Son