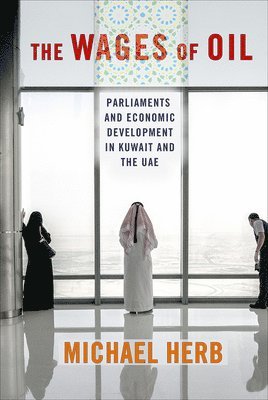 The Wages of Oil

The contrast between Kuwait and the UAE today illustrates the vastly different possible futures facing the smaller states of the Gulf. Dubai's rulers dream of creating a truly global business center, a megalopolis of many millions attracting immigrants in great waves from near and far. Kuwait, meanwhile, has the most spirited and influential parliament in any of the oil-rich Gulf monarchies. In The Wages of Oil, Michael Herb provides a robust framework for thinking about the future of the Gulf monarchies. The Gulf has seen enormous changes in recent years, and more are to come. Herb explains the nature of the changes we are likely to see in the future. He starts by asking why Kuwait is far ahead of all other Gulf monarchies in terms of political liberalization, but behind all of them in its efforts to diversify its economy away from oil. He compares Kuwait with the United Arab Emirates, which lacks Kuwait's parliament but has moved ambitiously to diversify. This data-rich book reflects the importance of both politics and economic development issues for decision-makers in the Gulf. Herb develops a political economy of the Gulf that ties together a variety of issues usually treated separately: Kuwait's National Assembly, Dubai's real estate boom, the paucity of citizen labor in the private sector, class divisions among citizens, the caste divide between citizens and noncitizens, and the politics of land.
Läsglädje för alla, varje dag