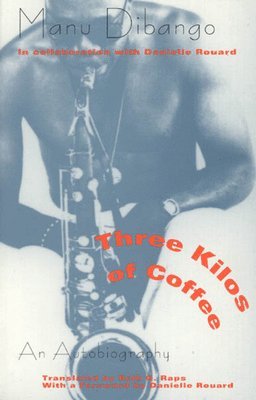 In 1948, at the age of 15, Manu Dibango left Africa for France, bearing three kilos of coffee for his adopted family and little else. This book chronicles Manu Dibango's remarkable rise from his birth in Douala, Cameroon, to his worldwide success - with "Soul Makossa" in 1972 - as the first African musician ever to record a Top 40 hit. Composer, producer, performer, film-score writer and humanitarian for the poor, Manu Dibango defines the "African sound" of modern world music. He has worked with and influenced such artists as Art Blakey, Don Cherry, Herbie Hancock, Harry Belafonte, Paul Simon and Johnny Clegg. In Africa, he has helped younger musicians, performed benefit concerts and transcribed for the first time the scores and lyrics of African musicians. The product of a "mixed marriage" (of different tribes and religions) who owes allegiances to both Africa and Europe, Dibango has always been aware of the ambiguities of his identity. This awareness has informed all of the important events of his life, from his marriage to a white French woman in 1957, to his creation of an "Afro-music" which blends blues, jazz, reggae, traditional European and African serenades, highlife, Caribbean and Arabic music. This music addresses the meaning of "Africanness" and what it means to be a Black artist and citizen of the world. This memoir is based on an extensive set of interviews in 1989 with French journalist Danielle Rouard. Illustrated with photographs, this book should be of interest to readers of jazz biographies, students of African music and ethnomusicology, and all those who are lovers of Manu Dibango's artistry and accomplishments.
Att läsa är att resa