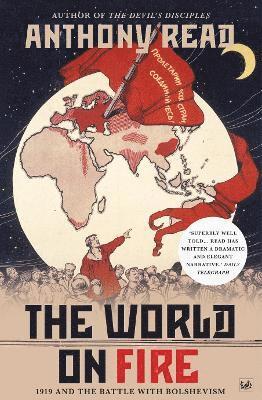 The World On Fire

At the 1919 Paris Peace Conference, Western leaders drafted a peace treaty that would punish German militarism and 'make the world safe for democracy' but the world itself was already fighting a new war, against terrorism. The great evil was now Bolshevism, which had burst onto the scene in 1917 and rapidly seared itself into the world's consciousness. The Allied powers' attempts to destroy this threatening ideology at its source by intervening in the Russian civil war were both unsuccessful and controversial and the tremors of the Russian upheaval eighteen months earlier were being felt throughout the world, resurfacing in bloody revolutions and even bloodier counter-revolutions in Germany, Hungary and the Baltic States, as well as in the massive strikes, riots and civil unrest that paralyzed the rest of the world. Military revolts involving thousands of British personnel saw a group of sailors imprisoned for taking over their ship, hauling down the white ensign and hoisting the red flag in its place, while in Ireland Michael Collins and the IRA were conducting a successful terrorist campaign against the British; in Italy Benito Mussolini deserted the socialist camp and drew up the Fascist Manifesto; and in the United States a series of terrorist bombings, later labelled the Great Red Scare, created a wave of hysteria that shook the very foundations of a free and democratic society. Anthony Read's absorbing and revelatory book chronicles and examines the running battle with Bolshevism, insurgency and fear during the most revolutionary year since 1789.
Läsglädje för alla, varje dag