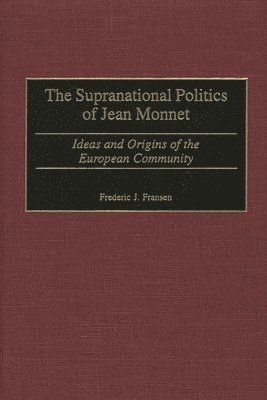 The Supranational Politics of Jean Monnet

Although previous advocates of European Unity proposed the replacement of the balance of power model of international relations, Jean Monnet was the first to try to do so along Franco-German rather than Franco-British lines. He concluded that restrictions on national sovereignty were essential and that there were steps that could be taken prior to full federation. Through his Community method, Monnet hoped to create a French-led, continental federation within a Western association. His United States of Europe was aimed not only back at the Franco-German conflict, but also forward to the problem of Europe's place in the world. This study explores Jean Monnet's European project and the intentions behind it from World War I to the 1960s. Fransen relies on a close and comparative reading of Monnet's notes and documents, placed in their political and historical context. Most work on Monnet's contribution begins with his later presence as an elder statesman of the European movement and reads his later pronouncements back into his earlier work. This book takes the opposite approach and, by concentrating on his earlier work, is able to show a more complicated picture of Monnet's aspirations than has been presented to date.
Läsglädje för alla, varje dag