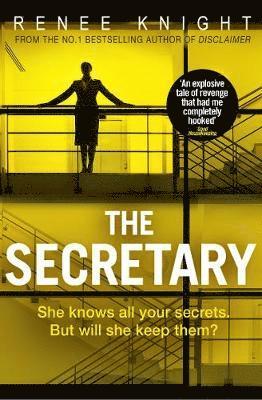 As heard on BBC Radio 4 'A Good Read' 'A cool, contemporary, whip-smart thriller.' Paula Hawkins, author of THE GIRL ON THE TRAIN and INTO THE WATER She knows all your secrets. But will she keep them? Look around you. Who holds the most power in the room? Is it the one who speaks loudest, who looks the part, who has the most money, who commands the most respect? Or perhaps it's someone like Christine Butcher: a meek, overlooked figure, who silently bears witness as information is shared and secrets are whispered. Someone who quietly, perhaps even unwittingly, gathers together knowledge of the people she's there to serve - the ones who don't notice her, the ones who consider themselves to be important. There's a fine line between loyalty and obsession. And when someone like Christine Butcher is pushed to her limit, she might just become the most dangerous person in the room . . . The eagerly anticipated new thriller from the No.1 bestselling author of Disclaimer. ________________ 'A scintillating double psychological portrait . . . an arresting ending reminiscent of Rendell at her flintiest.' Sunday Times 'Clever, clever, clever. At the black heart of this story is a personal assistant - the colleague in your office who hears and knows everything about everyone - and Renee leads us on a deeply unsettling exploration of the limits of loyalty. Believe me, chats by the photocopier will never be the same . . .' Fiona Barton, author of THE WIDOW 'A black diamond of a thriller . . . with a sting in its tail.' A. J. Finn, author of THE WOMAN IN THE WINDOW ________________ Readers love The Secretary: ***** 'Kept me turning pages long into the night.' ***** 'Head and shoulders above so many other novels in the genre.' ***** 'I don't know how Renee Knight does it but her writing is exceptional.'
Läsglädje för alla, varje dag