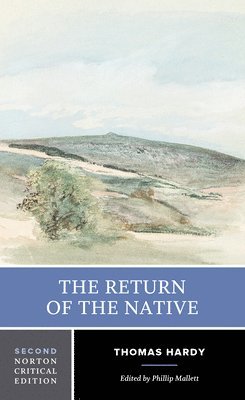 The Return of the Native

It is accompanied by more than 500 editorial footnotes, many new to this edition, that provide essential historical background and glossing of dialect words. Also new to the Second Edition are the twelve illustrations from the novel's first serial publication and Hardy's "Sketch Map of the Scene of the Story," which accompanied the 1878 edition. Again included is the "Map of Wessex of the Novels and Poems" from the 1912 Macmillan Wessex Edition of The Mayor of Casterbridge. Backgrounds and Contexts provides a useful "Glossary of Dialect Words" as well as four essays on the textual and publication history of the novel-including pieces by Simon Gatrell and Andrew Nash-all of which are newly included. Also included are six of Hardy's nonfiction writings on the dialect in the novel, the reading of fiction, and his correspondence, five of which are new to this edition. Criticism provides a selection of contemporary reviews that suggest The Return of the Native's initial reception as well nine of the most influential modern essays on the novel, by Gillian Beer, D. H. Lawrence, Michael Wheeler, Rosemarie Morgan, Donald Davidson, John Peterson, Richard Swigg, Pamela Dalziel, and Jennifer Gribble. A Chronology and Selected Bibliography are also included.
Läsglädje för alla, varje dag