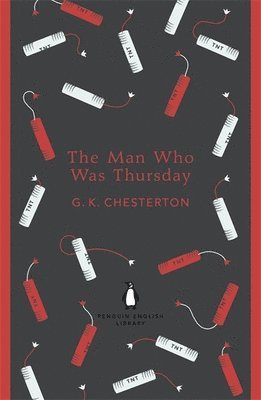 The Man Who Was Thursday

The Penguin English Library Edition of The Man Who Was Thursday by G. K. Chesterton '"A man's brain is a bomb," he cried out, loosening suddenly his strange passion and striking his own skull with violence. "My brain feels like a bomb, night and day. It must expand! It must expand! A man's brain must expand, if it breaks up the universe"' In a park in London, secret policeman Gabriel Syme strikes up a conversation with an anarchist. Sworn to do his duty, Syme uses his new acquaintance to go undercover in Europe's Central Anarchist Council and infiltrate their deadly mission, even managing to have himself voted to the position of 'Thursday'. When Syme discovers another undercover policeman on the Council, however, he starts to question his role in their operations. And as a desperate chase across Europe begins, his confusion grows, as well as his confidence in his ability to outwit his enemies. But he has still to face the greatest terror that the Council has: a man named Sunday, whose true nature is worse than Syme could ever have imagined ... The Penguin English Library - 100 editions of the best fiction in English, from the eighteenth century and the very first novels to the beginning of the First World War.
Läsglädje för alla, varje dag