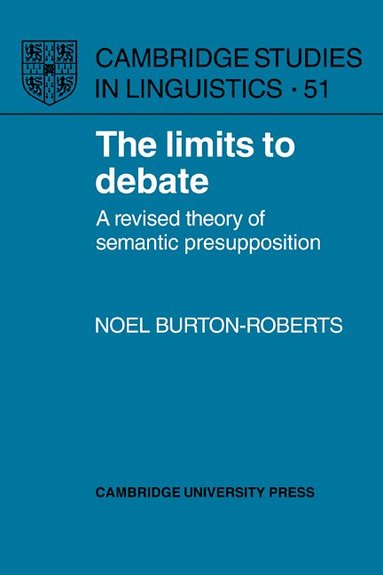 The Limits to Debate

Exponents and critics of semantic presupposition have almost invariably based their discussion on the ('Standard') definition of presupposition implied by Frege and Strawson. In this study Noel Burton-Roberts argues convincingly against this definition, that leads it to a three-valued semantics. He presents a very simple semantic definition which is weaker, more general and leads to a semantics more easily interpreted as two-valued with gaps. The author shows that a wide range of intuitive facts that eluded the Standard definition follow directly from this ('Revised') definition itself: facts about the presuppositions of compound sentences and modal sentences, about presuppositional conflict and about differences in the logical status of simple sentences suffering from presupposition failure. The book includes a detailed argument that an ambiguity of natural language negation, generally assumed to be necessary to the defence of semantic presupposition, is neither possible nor necessary in a presuppositional semantics. Noel Burton-Roberts has made an authoritative contribution to a debate which has involved philosophers and linguists for many years. His command of the issues, his clarity of exposition and his theoretical insight may well serve to change the boundaries of that debate.
Läsglädje för alla, varje dag