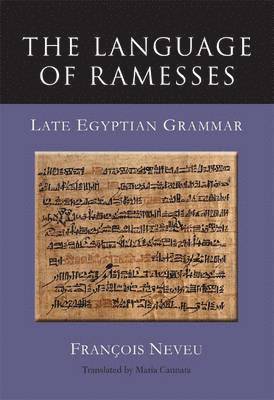 The Language of Ramesses

Francois Neveu enables the reader to explore the Ramesside age through an understanding of Late Egyptian. This phase corresponds to the language spoken from the 17th to the 24th dynasty, which became a written language - used for private letters, administrative, legal and literary texts, as well as some official inscriptions - during the Amarna period (circa 1364 BC). The first part of the book covers the basics of the grammar, the morphology, while the second part is devoted to the syntax, covering first the verbal system and then the nominal forms. Two appendices, one devoted to interrogative constructions and another to syllabic writing, complete the work. The book incorporates the most recent work on the subject and the clarity with which Neveu presents linguistic and grammatical points, and the hundreds of examples used to illustrate the grammatical presentation, makes this the ideal tool for anyone interested in learning Late Egyptian grammar in order to read and understand texts from this period. These texts also introduce the reader to the daily life of the Deir el-Medina workers, the social movements that shook the community, the conspiracies at court, the embezzlement of some priests and other prominent community figures, major historical events, as well as the stories and novels studied and read by the society of the time. Maria Cannata's translation makes this key work available in English for the first time.
Att läsa är att resa