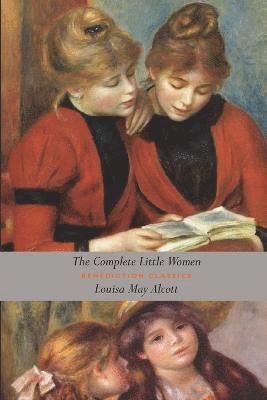 Louisa May Alcott ended Little Women (1868) with the words "So the curtain falls upon Meg, Jo, Beth, and Amy. Whether it ever rises again, depends upon the reception given the first act of the domestic drama called Little Women." It was an immediate commercial and critical success, and readers demanded to know more about the characters. Alcott quickly completed a second volume, Good Wives (1869), and later Little Men (1871) and Jo's Boys (1886). The novels follow the lives of the four March sisters-Meg, Beth, Jo and Amy, each with a very different character. It has been argued that within Little Women one finds the first vision of the "All-American girl" and that her multiple aspects are embodied in the differing March sisters. But whatever the reason, generations of readers have loved these novels since they were first published. This edition, containing Little Women, Good Wives, Little Men and Jo's Boys, is complete and unabridged. Also included are Frank T. Merrill's forty-three black and white illustrations to the first two books.
Läsglädje för alla, varje dag