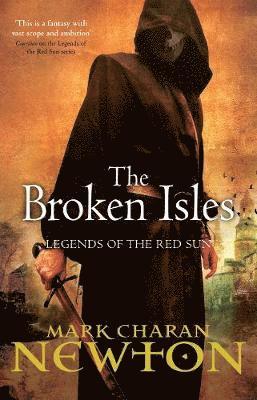 Fleeing refugees and enigmatic heroes, The Broken Isles is the fourth book in Mark Charan Newton's Legends of the Red Sun fantasy series. War spills into the Boreal Archipelago, as two rival cultures bring their eternal battle into this adjacent realm. Fresh from a military victory, Commander Brynd Lathraea plans to rebuild the city of Villiren, where he is confronted with a dilemma. There are friendly forces who have no other choice but to live alongside his own people, and their numbers will be required to fight in the looming conflict. The commander turns politician as he seeks to build bridges and embrace mysterious new technologies to further his ambitions. However, many in Villiren are sceptical of aliens coming to their city, tensions run high, and even the dream of a peaceful future brings with it inevitable clashes of beliefs. Meanwhile, Villjamur has been destroyed. A vast swathe of refugees from the legendary city are now on the run from an immense alien presence in the sky. Villages are being cleared and people are dying en masse. And Inquisitor Fulcrom finds himself at the helm of an operation to aid the refugee exodus to the coast, but it's a race against time before this threatened genocide is complete. Ancient civilisations line up on the field of battle. Exotic creatures and a possible god walk alongside citizens of the Empire. As the Legends of the Red Sun series draws to a close, there will be one final and immense conflict to decide the fate of multiple cultures forever.
Läsglädje för alla, varje dag