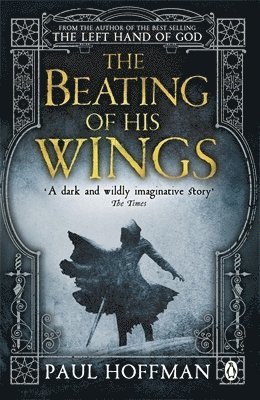 The Beating of his Wings

The Beating of his Wings by Paul Hoffman is the final instalment in his epic Cale and the Sanctuary of Redeemers series. Thomas Cale has been running from the truth. Since discovering that his brutal military training has been for one purpose - to destroy God's greatest mistake, mankind itself - Cale has been hunted by the very man who made him into the Angel of Death: Pope Redeemer Bosco. Cale is a paradox: arrogant and innocent, generous and pitiless. Feared and revered by those created him, he has already used his breathtaking talent for destruction to bring down the most powerful civilisation in the world. But Thomas Cale is weak. His soul is dying. As his body is wracked with convulsions he knows that the final judgment will not wait for a sick boy. As the day of reckoning draws close, Cale's sense of vengeance leads him back to the Sanctuary - and to confront the person he hates most in the world. Finally Cale must recognise that he is the incarnation of God's rage and decide if he will stand against the Sanctuary of the Redeemers and use his unique skill of laying waste to all things. The fate of mankind rests on Cale's decision. The Beating of his Wings is the third and final instalment in Paul Hoffman's epic Cale and the Sanctuary of the Redeemers trilogy, following The Left Hand of God and The Last Four Things. Phillip Pullman's His Dark Materials meets Umberto Eco's Name of the Rose, and fans of epic heroic fiction will love this series. Praise for Paul Hoffman: "This book gripped me from the first chapter and then dropped me days later, dazed and grinning to myself". (Conn Iggulden). "Tremendous momentum". (Daily Telegraph). "A cult classic..." (Daily Express). Paul Hoffman is the author of four previous novels: the two previous Thomas Cale titles, as well as The Golden Age of Censorship, a black comedy based on his experiences as a film censor and The Wisdom of Crocodiles, which predicted the collapse of the world financial system.
Läsglädje för alla, varje dag