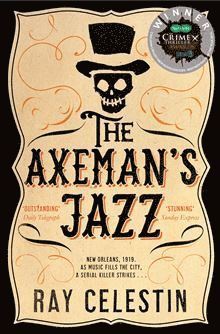 WINNER of the CWA John Creasey New Blood Dagger for Best Debut Crime Novel of the Year. As recommended on the Radio 2 Arts Show with Claudia Winkleman New Orleans, 1919. As music fills the city, a serial killer strikes ...New Orleans, 1919. As a dark serial killer - The Axeman - stalks the city, three individuals set out to unmask him ...Though every citizen of the 'Big Easy' thinks they know who could be behind the terrifying murders, Detective Lieutenant Michael Talbot, heading up the official investigation, is struggling to find leads. But Michael has a grave secret, and if he doesn't get himself on the right track fast, it could be exposed ...Former detective Luca d'Andrea has spent the last six years in Angola state penitentiary, after Michael, his protegee, blew the whistle on his corrupt behaviour. Now a newly freed man, Luca is back working with the mafia, whose need to solve the mystery of the Axeman is every bit as urgent as that of the authorities. Meanwhile, Ida is a secretary at the Pinkerton Detective Agency. Obsessed with Sherlock Holmes and dreaming of a better life, Ida stumbles across a clue which lures her and her musician friend, Louis Armstrong, to the case - and into terrible danger ...As Michael, Luca and Ida each draw closer to discovering the killer's identity, the Axeman himself will issue a challenge to the people of New Orleans: play jazz or risk becoming the next victim. And as the case builds to its crescendo, the sky will darken and a great storm will loom over the city ...Inspired by a true story, THE AXEMAN'S JAZZ, set against the heady backdrop of jazz-filled, mob-ruled New Orleans, is an ambitious, gripping thriller announcing a major new talent in historical crime fiction.
Läsglädje för alla, varje dag