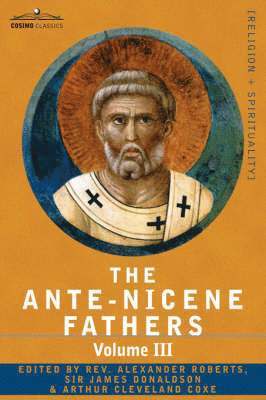 "One of the first great events in Christian history was the Council of Nicaea in 325 AD, convened to organize Christian sects and beliefs into a unified doctrine. The great Christian clergymen who wrote before this famous event are referred to as the Ante-Nicenes and the Apostolic Fathers, and their writings are collected here in a ten-volume set. The Ante-Nicenes lived so close to the time of Christ that their interpretations of the New Testament are considered more authentic than modern voices. But they are also real and flawed men, who are more like their fellow Christians than they are like the Apostles, making their words echo in the ears of spiritual seekers.

In Volume III of the 10-volume collected works of the Ante-Nicenes first published between 1885 and 1896, readers will find three of Tertullians most famous writings. In Apologetic, Tertullian addresses the powers that be in Rome, demanding that Christians be accepted and tolerated by Roman law. In Anti-Marcion, Tertullian attacks and discusses heretics. And in Ethical he discusses a variety of moral questions."
Läsglädje för alla, varje dag