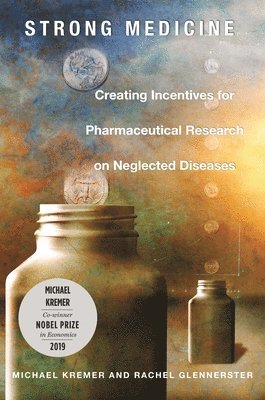 Millions of people in the third world die from diseases that are rare in the first world--diseases like malaria, tuberculosis, and schistosomiasis. AIDS, which is now usually treated in rich countries, still ravages the world's poor. Vaccines offer the best hope for controlling these diseases and could dramatically improve health in poor countries. But developers have little incentive to undertake the costly and risky research needed to develop vaccines. This is partly because the potential consumers are poor, but also because governments drive down prices. In Strong Medicine, Michael Kremer and Rachel Glennerster offer an innovative yet simple solution to this worldwide problem: "Pull" programs to stimulate research. Here's how such programs would work. Funding agencies would commit to purchase viable vaccines if and when they were developed. This would create the incentives for vaccine developers to produce usable products for these neglected diseases. Private firms, rather than funding agencies, would pick which research strategies to pursue. After purchasing the vaccine, funders could distribute it at little or no cost to the afflicted countries. Strong Medicine details just how these legally binding commitments would work. Ultimately, if no vaccines were developed, such a commitment would cost nothing. But if vaccines were developed, the program would save millions of lives and would be among the world's most cost-effective health interventions.
Läsglädje för alla, varje dag