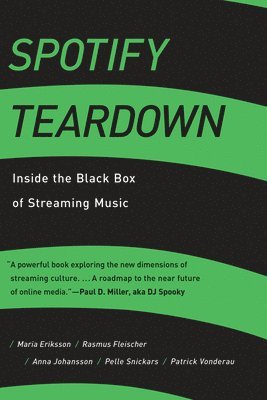 An innovative investigation of the inner workings of Spotify that traces the transformation of audio files into streamed experience. Spotify provides a streaming service that has been welcomed as disrupting the world of music. Yet such disruption always comes at a price. Spotify Teardown contests the tired claim that digital culture thrives on disruption. Borrowing the notion of "teardown" from reverse-engineering processes, in this book a team of five researchers have playfully disassembled Spotify's product and the way it is commonly understood. Spotify has been hailed as the solution to illicit downloading, but it began as a partly illicit enterprise that grew out of the Swedish file-sharing community. Spotify was originally praised as an innovative digital platform but increasingly resembles a media company in need of regulation, raising questions about the ways in which such cultural content as songs, books, and films are now typically made available online. Spotify Teardown combines interviews, participant observations, and other analyses of Spotify's "front end" with experimental, covert investigations of its "back end." The authors engaged in a series of interventions, which include establishing a record label for research purposes, intercepting network traffic with packet sniffers, and web-scraping corporate materials. The authors' innovative digital methods earned them a stern letter from Spotify accusing them of violating its terms of use; the company later threatened their research funding. Thus, the book itself became an intervention into the ethics and legal frameworks of corporate behavior.
Läsglädje för alla, varje dag