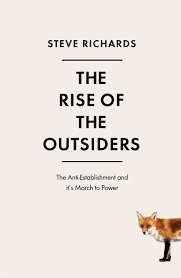 The Rise of the Outsiders

Politics in the West has become unpredictable and tumultuous. In recent years, voters have deserted the political centre like never before. Whether it's Trump, Brexit, Le Pen, Tsipras, or even Corbyn, why have outsiders and populists flourished on far left and far right? Why is the political landscape shifting so rapidly? In this landmark book, celebrated political commentator Steve Richards provides a clear and penetrating analysis of the biggest political story of the past fifty years. He argues that despite charismatic outsiders dominating the headlines, the real answers lie in the failure of the mainstream to evolve in a world still suffering the fallout of the financial crash in 2008. Exploring factors from globalization and a changing media to rising immigration and stagnant wages, he reveals just why confidence in conventional politics is at an all-time low - and why many voters (wrongly) see mainstream politicians as self-interested and aloof. And what of the outsiders themselves? Analysing their record so far, Richards argues that the reasons for their success also sow the seeds of their eventual demise. If they do gain power, they inevitably become insiders themselves - and fail to live up to their outlandish promises. But with the world increasingly unstable in the meantime, Richards warns that there is an urgent need for conventional politicians to reconnect with voters and for the electorate to engage with the constraints on elected politicians. Intelligent, nuanced and wide-ranging, this is the essential handbook for understanding the chaotic political times in which we live.
Att läsa är att resa