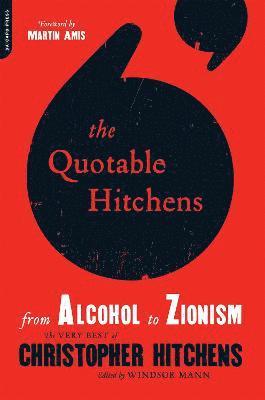 Over the past few decades, the bestselling author of "Hitch-22" has crisscrossed the globe debating religious scholars, Catholic clergy, rabbis, and devout Christians on the existence of God--appearances that have attracted thousands of people on both sides of the issue. He has been invited to talk shows and events to discuss everything from the death of Jerry Falwell to the sainthood of Mother Teresa, from U.S. policy in the Middle East to the dangers of religious fundamentalism and beyond. And he is always armed with pithy discourse that is as intelligent as it is quotable.

"The Quotable Hitchens" gathers for the first time the eminent journalist, public intellectual, and all-around provocateur Christopher Hitchen's most scathing, inflammatory, hilarious, and clear-cut commentary from the course of his storied career. Drawn from his many TV appearances, debates, lectures, interviews, articles, and books, the quotations are arranged alphabetically by subject--from atheism and alcoholism to George Orwell and Bertrand Russell, from Islamofascism and Iraq to smoking and sex.