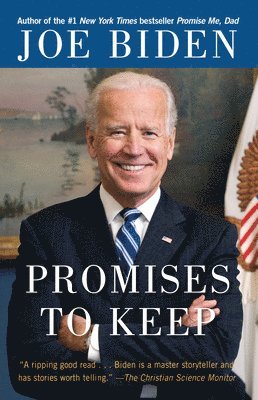 "Nearly forty years after I first got involved, I remain captivated by the possibilities of politics and public service. In fact, I believe that my chosen profession is a noble calling. Thats why I wanted to be a part of it."-Joe BidenAs a United States senator from Delaware since 1973, Joe Biden has been an intimate witness to the major events of the past four decades and a relentless actor in trying to shape recent American history. He has seen up close the tragic mistake of the Vietnam War, the Watergate and Iran-contra scandals, the fall of the Berlin Wall, the reunification of Germany, the disintegration of the Soviet Union, the aftermath of the 9/11 attacks, a presidential impeachment, a presidential resignation, and a presidential election decided by the Supreme Court. Hes observed Nixon, Ford, Carter, Reagan, Clinton, and two Bushes wrestling with the presidency; hes traveled to war zones in Europe, the Middle East, and Africa and seen firsthand the devastation of genocide. He played a vital role by standing up to Ronald Reagans effort to seat Judge Robert Bork on the Supreme Court, fighting for legislation that protects women against domestic violence, and galvanizing Americas response (and the worlds) to Slobodan Milosevics genocidal march in the Balkans. In Promises to Keep, Biden reveals what these experiences taught him about himself, his colleagues, and the institutions of government.With his customary candor, Biden movingly recounts growing up in a staunchly Catholic multigenerational household in Scranton, Pennsylvania, and Wilmington, Delaware; overcoming a demoralizing stutter; marriage, fatherhood, and the tragic death of his wife Neilia and infant daughter Naomi; remarriage and re-forming a family with his second wife, Jill.
Läsglädje för alla, varje dag