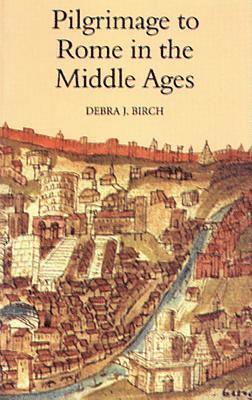 Pilgrimage to Rome in the Middle Ages: Continuity and Change

Debra Birch's lively account of pilgrimage to Rome throughout the medieval period is well-documented and clearly presented. HISTORY TODAY (Emma Mason)Well researched, clearly written, and, quite apart from the eternal city, provides an excellent introduction to pilgrimage as a whole. CHURCH TIMES (Nicholas Orme) Rome was one of the major pilgrim destinations in the middle ages. The belief that certain objects and places were a focus of holiness where pilgrims could come closer to God had a long history in Christian tradition; in the case of Rome, the tradition developed around two of the city's most important martyrs, Christ's apostles Peter and Paul. So strong were the city's associations with these apostles that pilgrimage to Rome was often referred to as pilgrimage to the threshold of the apostles'. Debra Birch conveys a vivid picture of the world of the medieval pilgrim to Rome - the Romipetae, or Rome-seekers' - covering all aspects of their journey, and their life in the city itself. DEBRA BIRCH is assistant secretary at the Institute of Historical Research. CONTENTS The Cult of Saints and Pilgrimage to Rome . The Journey to Rome . Obligations and Privileges . Rome of the Pilgrim I . Rome of the Pilgrim II . Welfare Provisions for Pilgrims in Rome . The Popularity of Pilgrimage to Rome in the 12th Century . The 13th-Century Revival.
Läsglädje för alla, varje dag