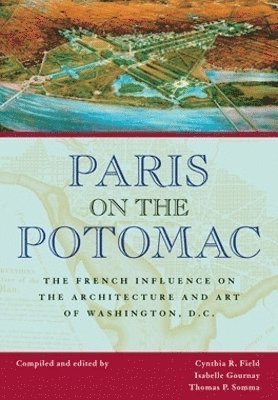 Paris on the Potomac

In 1910 John Merven Carrere, a Paris-trained American architect, wrote, "Learning from Paris made Washington outstanding among American cities." The five essays in Paris on the Potomac explore aspects of this influence on the artistic and architectural environment of Washington, D.C., which continued long after the well-known contributions of Peter Charles L'Enfant, the transplanted French military officer who designed the city's plan. Isabelle Gournay's introductory essay provides an overview and examines the context and issues involved in three distinct periods of French influence: the classical and Enlightenment principles that prevailed from the 1790s through the 1820s, the Second Empire style of the 1850s through the 1870s, and the Beaux-Arts movement of the early twentieth century. William C. Allen and Thomas P. Somma present two case studies: Allen on the influence of French architecture, especially the Halle aux Bles, on Thomas Jefferson's vision of the U.S. Capitol; and Somma on David d'Angers's busts of George Washington and the Marquis de Lafayette. Liana Paredes offers a richly detailed examination of French-inspired interior decoration in the homes of Washington's elite in the late nineteenth and early twentieth centuries. Cynthia R. Field concludes the volume with a consideration of the influence of Paris on city planning in Washington, D.C., including the efforts of the McMillan Commission and the later development of the Federal Triangle complex. The essays in this collection, the latest addition to the series Perspectives on the Art and Architectural History of the United States Capitol, originated in a conference held by the U.S. Capitol Historical Society in 2002 at the French Embassy's Maison Francaise.
Läsglädje för alla, varje dag