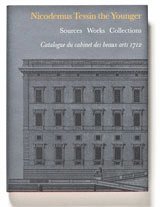 The project Nicodemus Tessin the Younger - Sources, Works, Collections was initiated in 1999 and aims at a systematic analysis and publication of the manuscripts and collections of the architect Nicodemus Tessin the Younger (1654-1728). After three volumes containing editions of textual sources (see below), a catalogue of Tessin's collection of drawings for ecclesiastical and garden architecture was published in 2004. The next planned volume in the series is a catalogue of Tessin's internationally renowned collection of drawings for the decorative arts. The Swedish architect acquired a large part of the material during his European tour 1687-1688, when he studied the art of interior decoration in Italy, France and the Netherlands, preparing for the construction and furnishing of a new Royal Palace in Stockholm. Among the drawings are around fifty sheets with sketches for furniture and decorative panels with rich acanthus ornaments, acquired in Rome. The court of Louis XIV was, however, the most important model, and until the end of his life, Tessin continued ordering drawings, books and prints from France as reference tools for his work. The catalogue work is based on Carl Gustaf Tessin's precise inventory of his father's collection, written in 1732. The drawings collection of Nicodemus Tessin the Younger forms part of the larger Tessin-Hårleman Collection (THC) at the Nationalmuseum. European and North American scholars frequently consult this documentation of seventeenth- and eighteenth-century architecture and decorative arts. One reason is that the collection contains numerous records of buildings, gardens and objects that have been lost. The project is led by the research curator Martin Olin with financial support from The Bank of Sweden Tercentenary Foundation and The Royal Swedish Academy of Letters, History and Antiquities. The project also has an international advisory committee.
Läsglädje för alla, varje dag