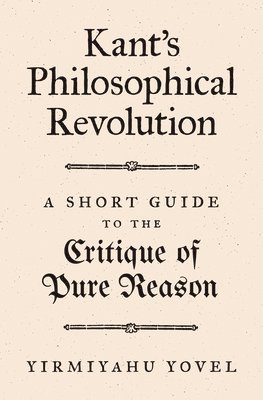 A short, clear, and authoritative guide to one of the most important and difficult works of modern philosophy Perhaps the most influential work of modern philosophy, Immanuel Kant's Critique of Pure Reason is also one of the hardest to read, since it brims with complex arguments, difficult ideas, and tortuous sentences. A philosophical revolutionary, Kant had to invent a language to express his new ideas, and he wrote quickly. It's little wonder that the Critique was misunderstood from the start, or that Kant was compelled to revise it in a second edition, or that it still presents great challenges to the reader. In this short, accessible book, eminent philosopher and Kant expert Yirmiyahu Yovel helps readers find their way through the web of Kant's classic by providing a clear and authoritative summary of the entire work. The distillation of decades of studying and teaching Kant, Yovel's "systematic explication" untangles the ideas and arguments of the Critique in the order in which Kant presents them. This guide provides helpful explanations of difficult issues such as the difference between general and transcendental logic, the variants of Transcendental Deduction, and the constitutive role of the "I think." Yovel underscores the central importance of Kant's insistence on the finitude of reason and succinctly describes how the Critique's key ideas are related to Kant's other writings. The result is an invaluable guide for philosophers and students.
Att läsa är att resa