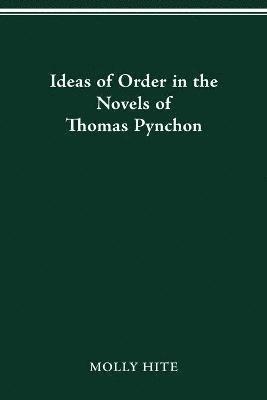 Ideas of Order in the Novels of Thomas Pynchon

Somewhere near the beginning of this incisive critical study of perhaps the most elusive and, to some minds, structurally disordered of living writers, Molly Hite notes that the idea of order has always fascinated novelists. She attributes this to the genre's being a hybrid, committed as it is, on the one hand, to a rigorous teleology in which events exist for the sake of resolution, and, on the other, to imitating a world that stubbornly refuses to add up. The teleological impetus of narrative, she notes, reflects "a God-ordered universe," while the mimetic tendency describes "a man-centered world." And because the two world views are irreconcilable, they pose a dilemma-the dilemma that Pynchon treats satirically in his three novels: that the alternative to theology is paranoia. In confronting his characters with evidence that either a transcendent power imposes order on the world, or that, in the absence of such a power, all order is illusory, Pynchon parodies a postromantic attitude that takes these extremes as exhaustive. The worlds that Pynchon projects in his three novels-V., The Crying of Lot 49, and Gravity's Rainbow-are complex and difficult to negotiate; but they are not, Dr. Hite insists, incoherent. And even when they are most bizarre and surreal, they are familiar; for they evoke a multilayered reality in which multiple means of putting things together manage to coexist without ever resolving into a single, definitive system of organization. By placing thematic concerns within the context of Pynchon's experiments with narrative structure and voice, and in this way helping to correct the imbalance that has tended to minimize such formal features, Dr. Hite leads to an increased understanding of Pynchon's spectacle of a postreligious society committed to a vision of apocalypse.Molly Hite is assistant professor of English literature at Cornell University.
Läsglädje för alla, varje dag