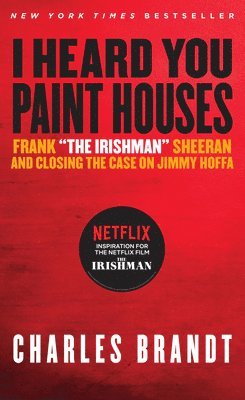 I Heard You Paint Houses

You've seen the teaser trailer, now read the book that is the inspiration for the year's biggest movie, THE IRISHMAN: A NETFLIX film directed by Martin Scorsese, starring Robert De Niro, Al Pacino, Joe Pesci and Harvey Keitel, and written by Steven Zaillian.

"Sheeran's confession that he killed Hoffa in the manner described in the book is supported by the forensic evidence, is entirely credible, and solves the Hoffa mystery." - Michael Baden M.D., former Chief Medical Examiner of the City of New York

Updated with a 57-page Conclusion by the author that features new, independent corroboration of Frank Sheeran's revelations about the killing of Jimmy Hoffa, the killing of Joey Gallo and the murder of JFK, along with stories that could not be told before.

"I heard you paint houses" are the first words Jimmy Hoffa ever spoke to Frank "the Irishman" Sheeran. To paint a house is to kill a man. The paint is the blood that splatters on the walls and floors. In the course of nearly five years of recorded interviews, Frank Sheeran confessed to Charles Brandt that he handled more than twenty-five hits for the mob, and for his friend Hoffa.

Sheeran learned to kill in the U.S. Army, where he saw an astonishing 411 days of active combat duty in Italy during World War II. After returning home he became a hustler and hit man, working for legendary crime boss Russell Bufalino. Eventually Sheeran would rise to a position of such prominence that in a RICO suit then-U.S. Attorney Rudy Giuliani would name him as one of only two non-Italians on a list of 26 top mob figures.

When Bufalino ordered Sheeran to kill Hoffa, the Irishman did the deed, knowing that if he had refused he would have been killed himself.

Sheeran's important and fascinating story includes new information on other famous murders including those of Joey Gallo and JFK, and provides rare insight to a chapter in American history. Charles Brandt has written a page-turner that has become a true crime classic.
Läsglädje för alla, varje dag