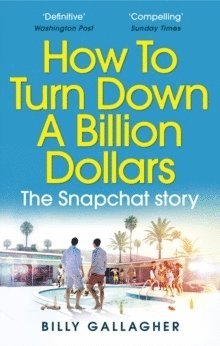 How to Turn Down a Billion Dollars: The Snapchat Story

Snapchat is the tech startup that got ahead by breaking all the rules. Its CEO, Evan Spiegel, and co-founder Bobby Murphy once famously walked away from a $3 billion cash offer from Facebook just two years after launch. Now worth $16 billion, Snapchat is considered by many to be one of the most innovative and important social media platforms for business. Videos posted by advertisers get 4 billion daily hits (as many as Facebook), with Snapchat charging over $700k per day for its Sponsored Selfies. Snapchat is also one the leading influencers amongst the younger generation, considered more influential than Facebook. Its founders are also notoriously secretive. In HOW TO TURN DOWN A BILLION DOLLARS, tech journalist Billy Gallagher takes us inside the rise (and rise) of one of Silicon Valley's hottest start-ups. A fellow Stanford undergrad and fraternity brother of the company's founding trio, Gallagher has been covering Snapchat for TechCrunch and other outlets since its founding, and brings unique access and perspective to a company Bloomberg Business has called a cipher in the Silicon Valley technology community. Part Kevin Roose's Young Money, part Ashlee Vance's Elon Musk, and part Ben Mezrich's Accidental Billionaires, HOW TO TURN DOWN A BILLION DOLLARS will be the definitive account of a company whose goal is no less than to remake the future of entertainment.
Läsglädje för alla, varje dag