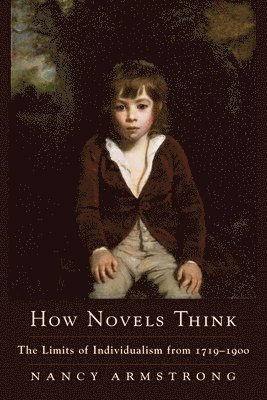 Nancy Armstrong argues that the history of the novel and the history of the modern individual are, quite literally, one and the same. She suggests that certain works of fiction created a subject, one displaying wit, will, or energy capable of shifting the social order to grant the exceptional person a place commensurate with his or her individual worth. Once the novel had created this figure, readers understood themselves in terms of a narrative that produced a self-governing subject. In the decades following the revolutions in British North America and France, the major novelists distinguished themselves as authors by questioning the fantasy of a self-made individual. To show how novels by Defoe, Austen, Scott, Bronte, Dickens, Eliot, Hardy, Haggard, and Stoker participated in the process of making, updating, and perpetuating the figure of the individual, Armstrong puts them in dialogue with the writings of Locke, Hume, Rousseau, Malthus, Darwin, Kant, and Freud. Such theorists as Althusser, Balibar, Foucault, and Deleuze help her make the point that the individual was not one but several different figures. The delineation and potential of the modern subject depended as much upon what it had to incorporate as what alternatives it had to keep at bay to address the conflicts raging in and around the British novel.
Läsglädje för alla, varje dag