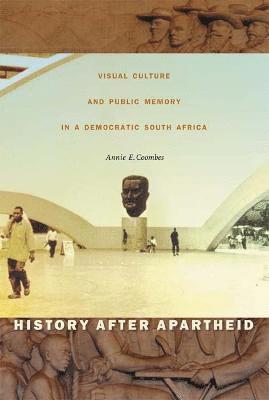 History After Apartheid: Visual Culture and Public Memory in a Democratic South Africa

The democratic election of Nelson Mandela as president of South Africa in 1994 marked the demise of apartheid and the beginning of a new struggle to define the nation's past. "History after Apartheid" analyzes how, in the midst of the momentous shift to an inclusive democracy, South Africa's visual and material culture represented the past while at the same time contributing to the process of social transformation. Considering attempts to invent and recover historical icons and narratives, art historian Annie E. Coombes examines how strategies for embodying different models of historical knowledge and experience are negotiated in public culture--in monuments, museums, and contemporary fine art.

"History after Apartheid "explores the dilemmas posed by a wide range of visual and material culture including key South African heritage sites. How prominent should Nelson Mandela and the African National Congress be in the museum at the infamous political prison on Robben Island? How should the postapartheid government deal with the Voortrekker Monument mythologizing the Boer Trek of 1838? Coombes highlights the contradictory investment in these sites among competing constituencies and the tensions involved in the rush to produce new histories for the "new" South Africa.

She reveals how artists and museum officials struggled to adequately represent painful and difficult histories ignored or disavowed under apartheid, including slavery, homelessness, and the attempted destruction of KhoiSan hunter-gatherers. Describing how contemporary South African artists address historical memory and the ambiguities uncovered by the Truth and Reconciliation Commission, Coombes illuminates a body of work dedicated to the struggle to simultaneously remember the past and move forward into the future.