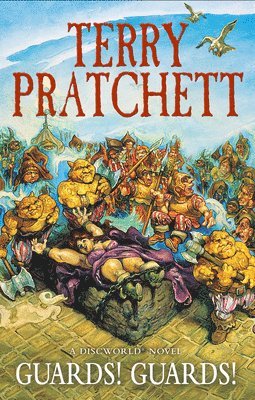 First book of the original and best CITY WATCH series, now reinterpreted in BBC's The Watch 'This is one of Pratchett's best books. Hilarious and highly recommended' The Times The Discworld is very much like our own - if our own were to consist of a flat planet balanced on the back of four elephants which stand on the back of a giant turtle, that is . . . _________________ 'It was the usual Ankh-Morpork mob in times of crisis; half of them were here to complain, a quarter of them were here to watch the other half, and the remainder were here to rob, importune or sell hotdogs to the rest.' Insurrection is in the air in the city of Ankh-Morpork. The Haves and Have-Nots are about to fall out all over again. Captain Sam Vimes of the city's ramshackle Night Watch is used to this. It's enough to drive a man to drink. Well, to drink more. But this time, something is different - the Have-Nots have found the key to a dormant, lethal weapon that even they don't fully understand, and they're about to unleash a campaign of terror on the city. Time for Captain Vimes to sober up.
Läsglädje för alla, varje dag