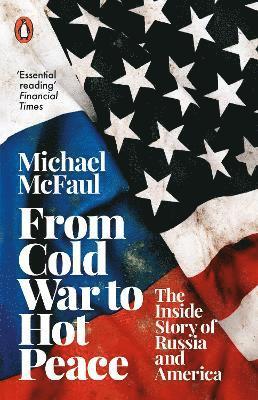 From Cold War to Hot Peace

'A fascinating and timely account of the current crisis in the relationship between Russia and the United States' Daniel Beer, The New York Times 'Could not be more timely ... crucial reading for anyone interested in what's happening inside Putin's head' Oliver Bullough, Prospect A revelatory, behind-the-scenes account of Russian-American relations, from a former US ambassador and 'Obama's top White House advisor on Russia policy' (The New York Times) In 2008, when Michael McFaul was asked to leave his perch at Stanford and join President-elect Barack Obama's national security team, he had no idea that he would find himself at the beating heart of one of today's most contentious international relationships. McFaul had been studying and visiting Russia for decades, becoming one of America's preeminent scholars on the country during the first Putin era. During President Obama's first term, McFaul helped craft the policy known as "Reset," which fostered unprecedented collaboration between the two countries under Dmitry Medvedev's presidency. Later, as U.S. ambassador from 2012 to 2014, he witnessed firsthand how Vladimir Putin's new rise interrupted this era of cooperation and returned Russian-American relations to a level of hostility not known since the darkest days of the Cold War. From the outset of his ambassadorship, the Kremlin accused McFaul of being sent by Obama to foment revolution against Putin's regime. This resulting insider's account - uniquely combining history, politics and intimate personal knowledge of the corridors of power - takes us from Putin's dacha to ornate Kremlin chambers and the Oval Office, to explain how Russia really works, and why the world has entered a dangerous new era of confrontation.
Läsglädje för alla, varje dag