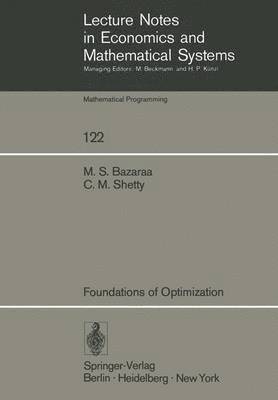 Current1y there is a vast amount of literature on nonlinear programming in finite dimensions. The pub1ications deal with convex analysis and severa1 aspects of optimization. On the conditions of optima1ity they deal mainly with generali- tions of known results to more general problems and also with less restrictive assumptions. There are also more general results dealing with duality. There are yet other important publications dealing with algorithmic deve10pment and their applications. This book is intended for researchers in nonlinear programming, and deals mainly with convex analysis, optimality conditions and duality in nonlinear programming. It consolidates the classic results in this area and some of the recent results. The book has been divided into two parts. The first part gives a very comp- hensive background material. Assuming a background of matrix algebra and a senior level course in Analysis, the first part on convex analysis is self-contained, and develops some important results needed for subsequent chapters. The second part deals with optimality conditions and duality. The results are developed using extensively the properties of cones discussed in the first part. This has faci- tated derivations of optimality conditions for equality and inequality constrained problems. Further, minimum-principle type conditions are derived under less restrictive assumptions. We also discuss constraint qualifications and treat some of the more general duality theory in nonlinear programming.
Läsglädje för alla, varje dag