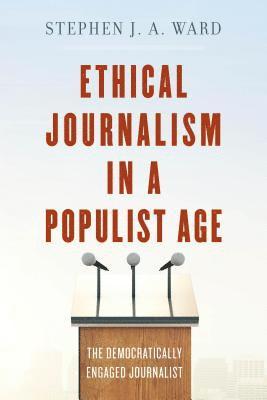 Ethical Journalism in a Populist Age

"Fake news," "alternative facts," and daily attacks on the media from the Trump White House are redefining the media's role for a new generation. Mainstream media has traditionally allowed journalists two roles. In order to remain ethical, they must either be neutral observers reporting the facts or signal that they are biased interpreters espousing a partisan agenda. In this provocative new work, leading global media ethicist Stephen Ward suggests that journalism needs to embrace a third path and begin practicing a new kind of journalism: democratically engaged journalism. It is only by breaking free of dualistic ethical practices that the world's media will be able to address 'Trumpism'-a heady mix of populism, authoritarian leadership, narrow patriotism, and moral tribalism (Us versus Them). Weaving in rich examples from daily journalism, this timely book will address practical questions such as how to cover a constant torrent of presidential "tweets," how fact-checking plays a part in democratically engaged media, and how journalists should respond to the pressure to be patriotic in their coverage of global issues such as immigration and the impact of Trump's "America First" foreign policy. At issue is the need to construct a new journalism ethics for today's social context. We need a new approach to journalism ethics not only to report on the Trump presidency but also for reporting in a digital, global world.
Läsglädje för alla, varje dag