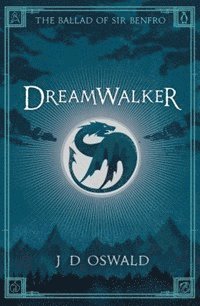 Dreamwalker is the first spellbinding novel in the new epic fantasy series from J. D. Oswald - The Ballad of Sir Benfro. In a small village, miles from the great cities of the Twin Kingdoms, a young boy called Errol tries to find his way in the world. He's an outsider - he looks different from other children and has never known his father. No one, not even himself, has any knowledge of his true lineage. Deep in the forest, Benfro, the young male dragon begins his training in the subtle arts. Like his mother, Morgwm the Green, he is destined to be a great Mage. No one could imagine that the future of all life in the Twin Kingdoms rests in the hands of these two unlikely heroes. But it is a destiny that will change the lives of boy and dragon forever ... And so begins The Ballad of Sir Benfro - the unputdownable tale of the great dragons returning to the kingdom of men. Breathtakingly compulsive and beautifully written, The Ballad of Sir Benfro is for readers hooked to the world of George R. R. Martin's Game of Thrones and those longing for the next Tolkien film adaptation. Dreamwalker is followed by The Rose Cord and The Golden Cage. J. D. Oswald is the author of the epic fantasy series, The Ballad of Sir Benfro. Currently, Dreamwalker, The Rose Cord and The Golden Cage are all available as Penguin eBooks. He is also the author of the Detective Inspector McLean series of crime novels under the name James Oswald. In his spare time James runs a 350-acre livestock farm in North East Fife, where he raises pedigree Highland Cattle and New Zealand Romney Sheep.
Läsglädje för alla, varje dag