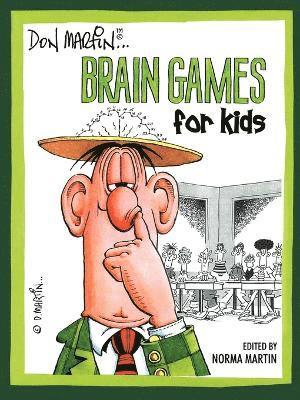 Called one of the "greatest" cartoonists of the twentieth century, Don Martin wrote and illustrated the puzzles and riddles in this book. His cartoons have always been in a class by themselves, Known for over fifty years for his zany sense of humor and unique style of drawing, Martin has used characters, gags and way-out sound effects familiar to readers of MAD and CRACKED Magazines, as well as from his many pocketbooks, greeting cards, calendars, and animated films, where his work was featured.

This specially drawn and created group of puzzles will amuse and challenge young fans; and introduce them to Captain Klutz, Martin's foolish and bungling super hero and many other of his kooky characters. All of them usually destined to find themselves victims of hilarious circumstances. While these visual and verbal puzzles and riddles are not too difficult, or too easy, they are full of laughs and fun. Ranging from simple connect the dots, to match the action to its sound effect, to writing the ending of a Martin gag cartoon.

With the special artistic grace and humor that won Martin numerous awards, he has outdone himself in BRAIN GAMES for KIDS. Martin's comments, clues and descriptions for each puzzle or riddle are filled with the silliness prized in the cartoon work that still appeals to his millions of readers,

Destined to be both a collectible and an enjoyable journey through a wide range of puzzle and riddle types, this book will gain Don Martin new fans and delight earlier ones. Highly recommended for all ages.
Att läsa är att resa