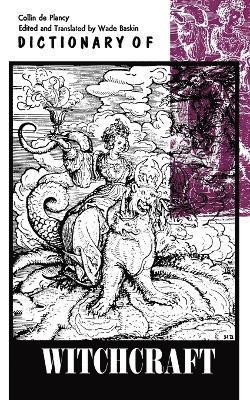 Dictionary of Witchcraft is a must-have resource for anyone interested in witchcraft, pagan religions, and the occult. This historical dictionary was the first reference work to seriously document superstitions, manifestations, magic, and superstitions. The authors interest was to compile a vast amount of matter that would interest, entertain and instruct others. This dictionary was consulted by some of the greatest Romantic writers, notably by Hugo. Collin de Plancy followed the tradition of many previous demonologists of cataloguing demons by name and title of nobility, as it happened with grimoires like Pseudomonarchia Daemonum and The Lesser Key of Solomon among others. It is considered a major work documenting beings, characters, books, deeds, and causes which pertain to the manifestations and magic of trafficking with Hell; divinations, occult sciences, grimoires, marvels, errors, prejudices, traditions, folktales, the various superstitions, and generally all manner of marvelous, surprising, mysterious, and supernatural beliefs. This edition was translated and introduced by occultist Wade Baskin. Collin de Plancy (17941881) was a French occultist, demonologist, author, and translator. His best-known work, Dictionary of Witchcraft (Dictionnaire Infernal), was published in 1818 but didnt receive wide acclaim until 1863 when a set of 69 illustrations by Louis Breton were added. Later in life, de Plancy converted to Catholicism and focused his studies on Catholic histories and mysticisms.
Läsglädje för alla, varje dag