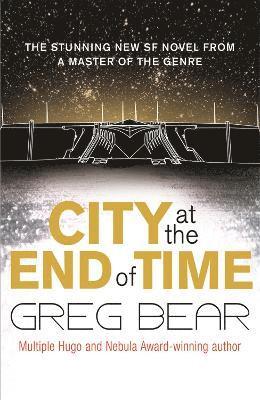 City at the End of Time

Do you dream of a city at the end of time? In a time like the present, on a world that may or may not be our own, three young people - Ginny, Jack, and Daniel - dream of a fabulous, decadent city in the distant future: the Kalpa. The dreams of Ginny and Jack overtake them without warning, leaving their bodies behind while carrying their consciousnesses forward, into the minds of two inhabitants of the Kalpa - a would-be warrior, Jebrassy, and an inquisitive explorer, Tiadba - who have been genetically retroengineered to possess qualities of ancient humanity. In turn, the dreams of Tiadba and Jebrassy carry them back, into the minds of Jack and Ginny. As for Daniel: he dreams of an empty darkness - all his future holds. But more than dreams link Ginny, Jack, and Daniel. They are fate-shifters, born with the ability to skip like stones across the surface of the fifth dimension, inhabiting alternate versions of themselves. And they are each guardians of an object whose origins and purpose are unknown, a gnarled, stony artifact called a sum-runner that persists unchanged through all versions of time. They can save the future, but they are being hunted down.
Läsglädje för alla, varje dag