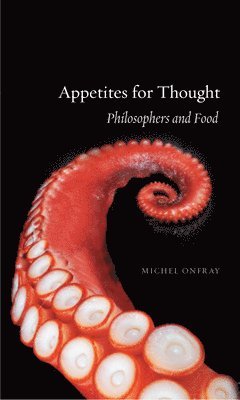 Appetites for Thought offers up a formidable intellectual challenge: can we better understand the concepts of philosophers from their culinary choices? Tracing the food obsessions of philosophers from Diogenes to Sartre, Michel Onfray - a philosopher himself - considers how their ideas relate to their diets. Would Diogenes have been an opponent of civilization without his taste for raw octopus? Would Rousseau have been such a proponent of frugality if his daily menu had included more than dairy products? For Kant, the nose and palate are organs of sensation without nobility, as he writes, 'the idea obtained from them is more a representation of enjoyment than cognition of the external object.' While for Nietzsche, 'it is through bad female cooks - through the complete absence of reason in the kitchen, that the evolution of man has been longest retarded and most harmed.' Sartre was famously repulsed by shellfish (not to mention tomatoes) because it was 'food buried in an object, and you have to pry it out' - and also renowned as the philosopher who developed a unique conception of nausea.Onfray guides us around the philosophers' banquet table with erudition, wit and irreverence, offering his own philosophical riffs on anything from fillet of cod, barley soup and sausages, to wine and coffee, in his own critique of culinary reason. Appetites for Thought will intrigue, provoke and entertain in equal measure, as well as make you crave a snack.
Läsglädje för alla, varje dag