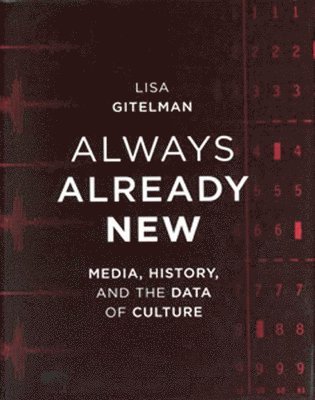 Always Already New: Media, History, and the Data of Culture

Choice Outstanding Academic Title, 2007.In "Always Already New," Lisa Gitelman explores the newness of new media while she asks what it means to do media history. Using the examples of early recorded sound and digital networks, Gitelman challenges readers to think about the ways that media work as the simultaneous subjects and instruments of historical inquiry. Presenting original case studies of Edison's first phonographs and the Pentagon's first distributed digital network, the ARPANET, Gitelman points suggestively toward similarities that underlie the cultural definition of records (phonographic and not) at the end of the nineteenth century and the definition of documents (digital and not) at the end of the twentieth. As a result, "Always Already New" speaks to present concerns about the humanities as much as to the emergent field of new media studies. Records and documents are kernels of humanistic thought, after all--part of and party to the cultural impulse to preserve and interpret. Gitelman's argument suggests inventive contexts for "humanities computing" while also offering a new perspective on such traditional humanities disciplines as literary history.Making extensive use of archival sources, Gitelman describes the ways in which recorded sound and digitally networked text each emerged as local anomalies that were yet deeply embedded within the reigning logic of public life and public memory. In the end Gitelman turns to the World Wide Web and asks how the history of the Web is already being told, how the Web might also resist history, and how using the Web might be producing the conditions of its own historicity.
Läsglädje för alla, varje dag